This is Morei Eushiba as a young man. 1935 approx.

The style is pre war so its aiki jiu jitsu the old fighting method before it was modified to aikido after Morei returned from the war.

We can see the resemblances of aikido here and its origins in the Jiu Jitsu Ryo of style.

The older O Sensei has a quite different grace and presence argueably.
Posted by Gerard Menzel at 21:01 No comments:

This is from an old clip of various schools of aikido from Japanese TV.

The Jiu waza or multiple attack is fantastic.

To move like this you have to train a long time and free up the mind so you can just react in the moment.

This is Zen in action and moving meditation in action

I hope you love it too.

For me this is the freedom of aikido
Posted by Gerard Menzel at 18:46 No comments:


Morihei Eushiba
The founder of aikido in an old video in training.

Posted by Gerard Menzel at 18:42 No comments:

A Few years ago I heard an interview with a French historian Nancy Dupree a scholar living in Afghanistan for years.

Heading of interview
A conversation with the veteran scholar of Afghanistan's history, art and archaeology. Over almost 50 years, Nancy Hatch Dupreee has witnessed the devastation of the country's living history, culture and people, and today she is trying to preserve an archive of important documents about Afghanistan.

The attitude of the woman and her profound love of the country could be felt over the air waves.  Since visiting Kabul, Bamian, Herat, the Kyber Pass, back in '78 I long to return.  However each time there is a war going on and I hesitate.

Here are a few pictures from my trip long ago in the historic 'Golden Era" or That amazing country when the King reigned and there was peace.  Just months after I was there the communist party took over the government and the King went into exile and then there was the period of Russian occupation and the rise of the Mujaheddin who gave rise to the seeds of the Talibs (students) trained in Pakistan who became rulers in their own right.

Of course the Taliban is a full blown movement now backed by Pakistan and others.

On my trip there many years ago I made friends with some young boys my age who were leather makers in Kabul and they became my hosts.  Daily I would sit in their shop and drink tea and chat and they educated me on everything from bushkashi (a riding sport which uses a goat carcass as a ball) customs, eating habits, Muslim relationships with girls to soccer and sport, all the things that an 18 year old is interested in. 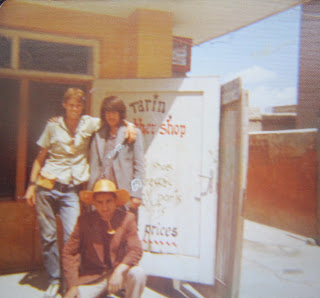 Bamian
I also took a bus trip to Bamian where the sacred Buddha statue and the old ruins of an ancient city lay at either end of the little valley.  The people were most hospitable and I camped out in the room of the local cafe on a carpet huddled beside the fire most nights as it was rather chilly.  By day I walked the dusty tracks around the town shaded by poplars with its mud brick buildings which would not have changed in theri basic shape since the time of the Buddhas 2000 years before.  It was a poor town occupied by descendants of the Shia minority called Hazara's.  These people are marginalized due to the fact that they were descendants of Genghis Khan who gave no quarter when he invaded the country.  As we can see here revenge payback and an eye for an eye are still alive and well here.  This is tribal mentality.


Herat
On the last week of the trip I stayed in Herat which is very close to Iran with its famous Blue Mosque known throughout the Arab world for its beauty for centuries.  I strolled in the mosque and spent some hours there bathing in its serenity.  Thus was the openness and acceptance of the people of Herat at this time and really most of the Muslim world in which I had visited then ie Indoneseia and Malaysia.

In Herat I stayed at a little hotel which had young people weaving carpets in the time honored tradition. These skills were passed on to family members and many families are too poor to send children to school full time. 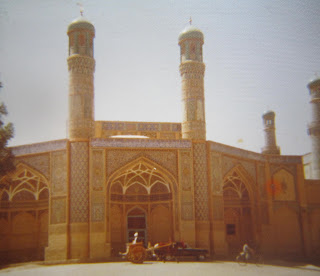 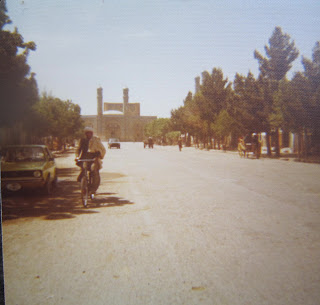 The journey from Peshawar via Landi Kotal to the Kyber pass was one I will never forget as tribal Pashtun gun slinging tribals got on and off the bus with their ancient weapons slung.  They were fierce warriors with beards and headress but one could feel that also they were disciplined and true to their honor code the Pashtunwali. AT Landi Kotal we stopped for tea and were able to visit the many gun shops stacked with all types of weaponry.

This beautiful site of Buddhism is under threat from the state owned  China Metallurgical Group.

Back in 1978 I was fortunate to visit Bamian for a few days and wandered up and down the Bamian valley walking through ancient Buddhist structures from the Kushian period.  Little did I comprehend the magnitude of my naive sojourn.  After the religious fanatics bombed the ancient statued my heart was struck like it was wounded by an arrow.

Now the Mes Aynak site is under threat from the Chinese hungry dragon of progress and control CCP.

Take a look at this breathtaking site before it is strip mined. One just has to look at the lines in the statues and see that the people back in those times were refined and sensitive people.  Oh how brutal the world has become.  Just to sit beside a statue of these Buddha's is a teaching in itself.

Copper mining on ancient site
Mes Aynak is about 25 klms from Kabul in the Logar province.  It was used in ancient Buddhist times to mine copper and now the Chinese are coming to wholesale mine.

Posted by Gerard Menzel at 17:34 No comments:


This was part of a Gassaku seminar in Canberra in 1995 with Shomen Renmei Aikido as hosts.
Gerard demonstarates here for Wild Lotus Aikido
Posted by Gerard Menzel at 19:43 No comments: