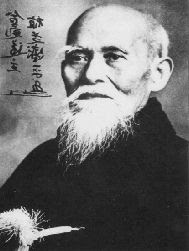 Morihei Ueshiba founded Aikido during this century as a way of purifying the body and spirit through the ancient system of martial virtue called Budo. He shaped Aikido to reflect a way of peace rather than combat and taught his students to be warriors of peace,........ ‘protecting every living thing in the universe.’ It is a disciplined martial art based on ancient principles, with a new vision for humanity, .... " to live in harmony and universal love. " ( Ueshiba)

It’s a devastatingly powerful, beautiful and has been described as a spiritual art. It uses spherical movement based on the laws of nature which were mysteriously revealed to the founder by the ancient Budo spirits of Kumino.  It is based on three symbols, the Circle; which is breath or Ki life force, the Triangle; being humanity yin/yang and the Square; our earth. This discipline teaches us to refine our inner self by relaxing the mind and body and heightening our perceptions, timing, stamina, balance and stability. It modifies our fearful psyche into a more open and fearless acceptance of life as we welcome change and challenges.
Below; The Founder Mr Ueshiba
The movements rely on utilizing the partner’s energy and redirecting it more advantageously so no conflict arises. It avoids brute strength and stresses flow, balance, timing, leading, spiritual harmony called Aiki. Consequently women, children and artists, dancers, are attracted to its Yin soft flowing nature. As one trains sensitivity to touch is developed together with, timing, centering and creative power based on self confidence develops. Life becomes more spontaneous, a place to create and play. The ego dissolves naturally as there is no competition.

‘Aikido is balance; hard, soft, powerful and varies according to your abilities.’
It is done in pairs on a mat and includes rolling spherical turns, maneuvering with strikes and holds, applying hold downs, and throwing your training partner who learns to receive the above techniques and relax. Both partners grow in the process of Aikido. Co-operation, flexibility, attunement with the partner are reflections of the warriors dance
Swords (boken) and sticks (jo) are used to refine Ki as one studies basic movements, the disarming of a partner, and stick forms which ultimately lead to free movement. The art shows us spiritual etiquette, respect for trainees, the teacher, the founder and the dojo ( place of spiritual training.) This leads to a respect, love and awe for all of creation, ‘ from the smallest seed to the grandest mountain.’

For the beginner it takes time to mould into the above principles, relax soften the body, flow, become flexible but Aikido is a lifelong endless investment in greater peace, fulfillment, personal discipline and power. It opens the way to a "new creativity." Aikido The way of martial Power thru Harmony.

What makes Aikido so unique ? ......Martial power plus.. Spiritual Awareness
It allows you to live in a violent world free of fear and tension. It is both a martial art which can be practiced with power and relaxarion. The student never actually hits, kicks or punches another student. When seen the art can appear extremely devestating or very elegantly graceful and unoffensive, depending on the feeling and experience of the people.

It can be experienced at any age level and be a benefit to all according to one's ability and needs. It is totally without competition, tournaments Women,children naturally enjoy the art because there is no need for strength and learn naturally to yield . The basics of the art have been developed into different styles after the founder passed away.

Morihei Ueshiba the founder of Aikido developed the art from the ancient traditions of Japanese Budo the ancient warrior code. He felt that Budo rather than being brutal was rather a philosophy of harmony and peace which stood to serve humanity by protecting and preserving all living things. It trains martial awareness, agility, power and stamina, fitness, courage, intuition.
What are the movement of Aikido?. O Sensei said the art of aikido is as flexible and open as the universe and the movements are infinite.
The founders son says;' Budo is to be realized in the quest for perfection as a human being, both in mind and body... and through constant training the individual Ki (life force) merges with the universal Ki of the cosmos'.
Also........"In Aikido there are no forms and no patterns. Natural movements are the movements of aikido. Its depth is profound and it is inexhaustible." O Sensei Founder (inset)

Below - Gerard with Masaoka sensei Kochi Japan
Philosophy of the founder & Spirituality
Divine
The divine does not like to be shut up in a building. The
divine likes to be out in the open. It is right here in
this very body. Everyone of us is a living universe, a
living shrine.
Humility
When you bow deeply to the universe it bows back to you;
when you call out the name of God it echoes inside
you............. Your spirit is the true shield.

Opponents confront us continually, but actually there is no
opponent there. Enter deeply into an attack and neutralise
it as you draw that misdirected force into your own sphere.

Contrasts
Each day of human life contains joy and anger, pain and
pleasure, darkness and light, growth and decay, each moment
is etched with natures grand design . Do not try to deny or
oppose the cosmic order of things.

Simplicity
Economy is the basis of society. When the economy is stable
the society develops. The ideal economy combines the
spiritual and the material and the best commodities to trade
are sincerity and love.

world; Illuminate the path according to your inner light.
Unity
In extreme situations the entire universe becomes our foe;
at such critical times unity of mind and technique is
essential . Do not let your heart waver.
Blend
In our techniques we enter completely into, blend totally
with and control firmly an attack. Strength resides where
one's ki is concentrated and stable; confusion and
maliciousness arise when ki stagnates.

Tao ''The best attitude is like water. Water is a
positive benefit to all things without competing with
things. It seeks out those places abominated by man.
Thereby it approaches the Tao.For one's dwelling choose
ground well. In cultivating one's mind/heart search the
deep well. In speaking know how to keep one's word. In
governing, rectify the self well. In serving do one's best.
In acting choose the time well. Only by not competing can
one be without reproach." Ch.8 Tao Teh Ching, Lao Tzu
Moving Zen; One has to accept that in this world there are
millions of objects and that each one is, respectively the
entire world... this is where the study of Buddhism
commences. When one comes to realize this fact, (one
perceives that) every object, every living thing is the
whole even though in itself does not realize it. As there
is no other time than this, every being , time is the whole
of time; one blade of grass, every single object is time.
Every point of time includes every being and every world.
Zen master Dogen  'Three Pillars of Zen' Roshi Philip
Kapleau.
Mind
Your mind essence is not subject to birth or death. It is
neither being nor nothingness, neither emptiness nor form
and color. Nor is it something that feels pain or joy. If
you think of nothing, wish for nothing, want to understand
nothing, cling to nothing and only ask yourself; what is the
true substance of the mind and of this one who is now
suffering ? Ending your days like clouds fading in the sky,
you will be eventually freed from your bondage to endless
change. Bassui ..to a dying man
Gerards Background since 1978
Gerard studied with Aikikai in Melbourne and Adelaide under Sugano sensei, in London with Kenatsuka sensei, in Switzerland with Takeda sensei and Canberra with Takeda sensei Shoman Remnei aikido and in Japan with Masaoka Sensei in Kochi 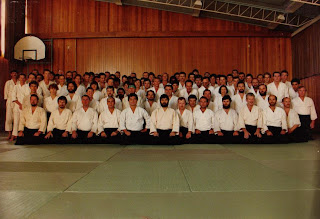 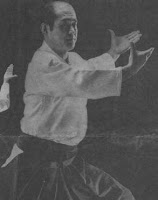 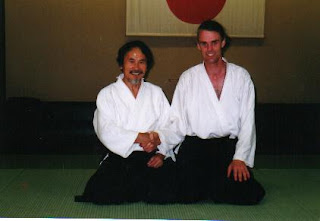 Masaoka Sensei in Kochi Japan. 2001
Gerard has taught Aikido in Adelaide and Victoria over many years and taken it to schools
and demonstrated it in public arenas and corporate places.
Phone 0407734479 for you special needs

Posted by Gerard Menzel at 22:37 No comments: