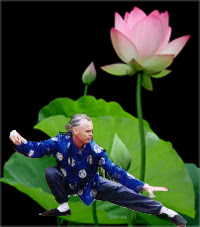 
We offer workshops in Asian multicultural studies. Gerard is a specialist in the field of Indian and Asian arts with a Graduate Certificate in Asian studies and completed a Masters Education Asia Studies at Flinders Uni. He has studied/lived overseas in China, India, Japan, Korea and Thailand. He has worked in Australia since 1987 teaching all ages in schools, colleges & university. ie; Flinders Uni. Adelaide uni. Preston TAFE Vic

Over the years Gerard has taught thousands of students Sumie painting and demonstrated Tai Chi and Aikido in schools and given Indian drumming performances. Gerard has worked in the Adelaide festival Education program, Asia in Schools week as well as performing at the Canberra National folk festivals, and ABC radio, Channel 9 and 10. He has received 2 artist in residencies, and a touring grant from Carclew - S.A Ed.dept. Arts. His workshops are recognized by the Asian Education Foundation. The Lotus workshops have been - quality assessed - in both the Independent Schools and S.A.arts Education unit. They are quality assured by SA Youth arts center.

Triple AAA Rated by Arts Bodies
You are guaranteed Quality and Professionalism
He has been an accepted member of the Associations; of India, Japan, Indonesia, Multicultural Arts Center, Community Arts Network. Tai Chi Assoc. Aus. He has had 10 Exhibitions of Oriental style art, Gerard can make your day special, and something to remember - just ring 1 number and the day is arranged with a number of interesting workshops to choose…. from a recognized and professional artist.


Wild Lotus has been Quality approved by S.A arts CARCLEW for Touring Arts and has received multiple arts grants from Carclew.


The children benefited greatly from seeing an artist at work and from working alongside him. It appeared to awaken something in each one of them. The program was also a great benefit in a cultural sense for it has helped children examine their own prejudices and learn something about another culture. ........ The program was indeed a "a many splendoured thing" It helped to break down barriers of prejudice....
Pat Shepherd Principal Campbelltown PS S.A. '92

The origins of Japanese Zen and brush painting lay in Chinese calligraphy and Zen arts. It is fun and simple to learn the basic steps. It can be a Zen ritual to center the mind, rid one of distraction and develop spiritual calm. Black ink is robustly painted on rice paper spontaneously as feelings guide the brush. Sumie is very free and informal ..and fun ! It improves visualization, gives an appreciation of nature. We paint nature, birds, landscapes, dragons, flowers, mountains, and bears. Gerard can also incorporate Haiku poetry into the classes and explain the historic / arts background of this poetry.


Aikido - ' The way of spiritual harmony '
non-violence in movement. - Japan
Aikido teaches the way of non-violence and harmony between 2 bodies. It is like a dance of harmony and balance. It is round and relaxing as movements are based on the Japanese principles of Budo. It includes graceful stretches and warm ups - breathing - smooth movements in pairs, learning to be gentle, soft and still being centered, confident and peaceful. Japanese sword and stick demo is included. Gerard has studied with famous Aikido teachers from Japan and runs his own school.


Aikido is a way of non-violence and is a special way for kids to find themselves via movement. It trains the body to be supple and flexible and the mind to flow with things around it in life. Children learn to defend themselves and have confidence in their personal strength without being aggressive.


It is a perfect way to keep fit, achieve mental calm and train the body to be alert in times of stress. It does this by working together in pairs where the opponents force is redirected into neutral ground and the partner rolls gracefully away or is taken peacefully to the floor and held in a pin. It is totally non aggressive and the aim is to find inner strength and peace through a real solid martial training of the body and the mind. 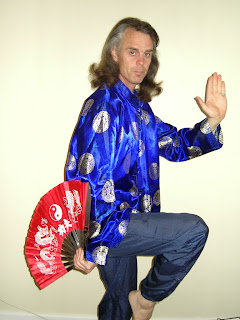 Children learn to find their own self confidence and release tension. They learn not to fear tense situations and to react in a calm manner. It is suitable for both girls and boys because it is soft. Most of all it is fun, non competitive and fosters a community spirit of caring for others, including oneself.

This is the Yang style form from Taipai from my teacher master Wong.


This is the broadsword or Dao

Tai Chi is a health system and a way of moving and relaxing from China. It has its origins in the world of nature as people tried to move like the animals and flow like the water and be still as a mountain. It is like a dance but even more ...It is a martial art and has a rich philosophy of Peace behind the physical form relating to nature, dragons, birds, and the environment.. Gerard has studied in Asia with masters of the art and includes sword and fan displays. The Chinese swords and fan is displayed and its history explained.

Yoga ; three sections; Yoga nidra (relaxation) Hatha yoga (postures) Dyana (meditation / mind) Yoga means union and Hatha means Sun and moon in sanksrit. It is a way of life with its origins in the ancient medicine and philosophy of India. Relaxation ; one relaxes each part of the body / mind while lying comfortably.
Gerard explains the history of Yoga and the ancient books called Vedas and where Yoga came from. We practice the poses and understand the heritage of peace and personal liberation found through the philosophy of Vedanta (World Knowledge)

Postures; The body is placed in various positions to release tension, emotions and increase energy flow and flexibility. Students learn different animal postures, breathing and calming positions. Some postures include the crocodile, sun salute, cobra, mountain, cat, tiger etc.. plus ways of calming the mind with breathing. We work in pairs and learn to direct emotions.
The Yoga philosophy of non violence, vegetarianism, meditation and the stages of personal development toward complete wholeness called enlightenment is explained in a fun way.
Gerard is an advanced Yoga teacher who has studied in India since 1978. (See Yoga page on this site.)

Tabla Indian Drums
Indian drums are the most sophisticated of any drumming systems in the world. They have a verbal language of their own, a mathematical basis and a tradition of teaching. The variety of Indian drums is vast and it is a delight to the ears to hear the subtle nuances, infinite rhythms, speed and trance inducing beat of the skins as it is first recited and then played. The number of rhythms includes over 300. The formal teaching by the Guru is a tradition in itself as Gerard has undertaken in India. He explains the history and tuition system. He is one of the few Australians who has studied at a classical Indian music college.
Gerard showcases many Indian drums including the pakawaj, nal, cymbals, harmonium organ and the flute. We sing ancient temple songs used for ritual and meditation Bhakti Yoga.

Posted by Gerard Menzel at 20:14 No comments: 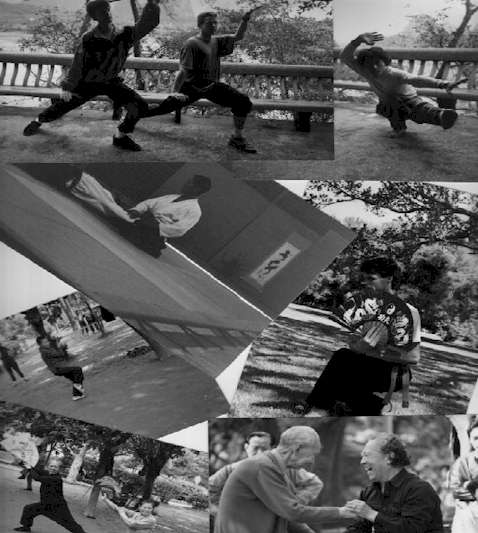 Picture Gerard in Yang shuo China 1997 and 1999 beside the Li river Huang Shuo
a picturesque haven for artists. On the right side top is Thomas Hu my Chen style teacher and friend. Bottom right is Sifu from New Park in Taipei who taught me the fan.


It has been translated as supreme ultimate soft fist. This moving meditation from China has stood the test of time over the centuries and survived due to its unique philosophy. It is a series of flowing movements called a form. There are various forms and schools. Gerard Teaches the Yang form and the Wu form plus various advanced sword, cutlass and fan forms.

The principles of the art are simple but require diligent practice to attain near perfection. Taoism, which is the philosophy behind the art, says there can be no absolute perfect but a relative perfection as consciousness keeps searching for improvement. The movements are circular and spiral. The breath is settled in the abdomen and allows us to free ourselves of unnecessary thoughts. The body is held upright and all the joints move freely as we centre our feet on the earth. This is our important link with Mother Nature. From this position of stability and flexibility we can move slowly in rhythm with the breath. It is excellent as a meditation and for improving posture, breathing, circulation, and low blood pressure. Picture Gerard in Yang Shuo China 1999.

This prepares us for life as we practice each day, blending with the subtle emotional and physical forces, which are in everlasting change. The philosophy of the art says that NOW is the only constant entity, which one can be sure of and that too is

Nature Changes in a piecemeal way and this is one of the laws of the universe. Tai Chi is in harmony with the natural laws and allows us to change slowly. The movements are designed to blend us to slow, steady growth. All the movements unfold from one to another and are linked with one another just as the elements of earth, water, wind and fire are joined to form the wholeness of the forests, the oceans and the mountains.


Tai Chi is the lifetime study of personal energy called Chi, which is the essence of everything alive. In that process we learn better concentration, centering, self discipline, the relativity of all life and spirituality. The art is also a self-defense which is an optional side of its study and is among the most respected Chinese martial arts, which is taught only after years mental straining and hard styles (kung Fu).
Picture Gerard with sifu New Park Taipei 1982
Gerard teaches Chi Kung exercises to beginners and then the various short forms then moves to the longer Yang and Wu sets. The majestic long sword form (dragon spirit), powerful cutlass forms (tiger spirit) and scholars fan form are taught thereafter.

Gerard's teacher is Sifu Yau Yee Kay from Melbourne one of the most advanced teachers in Australia originally from China. Gerard has studied widely in Asia, Beijing, Taipei, Hong Kong with Master Wong, Sifu Wu Taipei,Thomas Hu Yangshuo China and Grandmaster Chen. He is founding president of the Taijiquan Assoc. S.A. an umbrella body of Tai Chi players / teachers and a member of Tai Chi Australia Assoc.

This is the Yang style slow cutlass form Mr Kay taught me.

Here is a link to an explanation of the cutlass 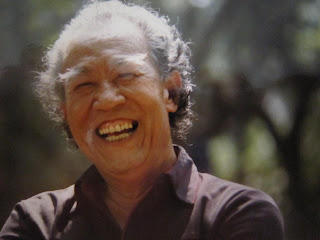 I spent a brief training period in 84 in this fabulous city of interesting people studying in the New Park and with Master Wong.

Sifu in the new park taught me the fan a style from the kung fu system while Master Wong taught the old Yang style Tai Chi.  The latter had many overseas students especially from France and I studied by night and in the early morning the fan form.

I found the fan with its kicks and round flowing movements very interesting and a challenge and it is always a joy to practice. I only tried to teach it to one student in Adelaide who last seen was in a monastery in Thailand studying Buddhism.

When one entered the trainings master Wong would give the student a Tai Chi  name  and mine was a splendid on "drunken dreamer".  and here is the membership form for you to see.  Teacher was very old and in his 80's then but very spritely and fit.  He was also a big man for a Chinese. 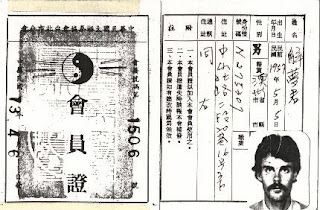 Posted by Gerard Menzel at 18:46 No comments: