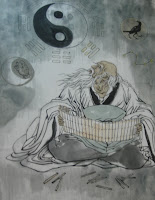 Yin and yang are the two forces of the universe in change and motion. They are the creation of the void. In this world of change and phenomena these two mutual forces interact to make change. In sumie these forces are worked with in the form of black ink and the white paper.

Although black is the opposite of white one would not exist without the other so they are interdependent and exist within the relativity of our universe. In sumie we are encouraged to use our imagination to feel and see colour within the painting. For example if we paint a rose the petals are often done with a light grey color so when we look at the art our mind imagines a colour. The symbolism of black and white in sumie relates to Zen and the above forementioned relativity of life in all its forms.

When we see the truth of this relativity then we touch on the heart of Zen and road to realization. This philosophy of the Tao Yin and Yang is accepted by Buddhists, Taoists alike with few differences of nuance. If we accept that Yin and Yang exist then although the world appears to be dualistic in reality it can not be within the relativity of Tao. For example if love exists also hate will exist. If movement exists then stillness will follow. The point to remember is that one is interdependent not exclusive of the other. This brings our mind to the point of unity within the Void or Sunya. Any differences / contrasts within our universe are relative and subject to change and time. This knowledge allows us to have a very Big mind, a mind which embraces everything. It also shows us the way to moderation and the middle way.
Posted by Gerard Menzel at 23:00 No comments:

The idea of the void or Shunya was first put forward by an ancient Indian scholar called Nargajuna, (AD 200) Madhyaminka the middle way or the philosophy of the void. In sumie the white paper is emptiness. The ink is used and we fill in the void with the movement of yin and yang. ( moving right and left, big and small, front and back, left and right, male and female, high and low, dark and light, inside and outside.) All living forms and creatures in the world coming from the movement of yin yang are what the Taoist Lao Tzu called the myriad things. He states that the mother of the universe is TAO and in the creation of that universe we live in the Ten thousand things was created with the attributes of Yin and Yang.

The void can teach us and is the inspiration for creativity. It is the source of everything seen and unseen. Essentially the source is free of movement and displays an aura of peace, transparency and is vacant. Similar to a Black Hole due to its inherent non physical nature it can not be named, added to nor destroyed. But it has infinite power. The practice of Zen as well as many other Asian arts is to understand that Void and to become one with it.

The scholar Kakuzo Okakura author of The book of Tea says this about what he calls Lao Tsu's idea of the vacuum. To read go here.

This Laotse illustrates by his favourite metaphor of the Vacuum. He claimed that only in vacuum lay the truly essential. The reality of a room, for instance, was to be found in the vacant space enclosed by the roof and the walls, not in the roof and walls themselves. The usefulness of a water pitcher dwelt in the emptiness where water might be put, not in the form of the pitcher or the material of which it was made. Vacuum is all potent because all containing. In vacuum alone motion becomes possible. One who could make of himself a vacuum into which others might freely enter would become master of all situations. The whole can always dominate the part. See The book of Tea


For more links to Sumie and the warrior spirit go here and an article on Shunya or the empty space go here.
Posted by Gerard Menzel at 04:30 No comments: