Biography of my teacher 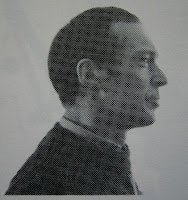 Andre Sollier was born in France a Swedish national,devoted to Zen,studied Sumie painting and Kyudo archery, Ikebana and Karate in Japan. He taught at the C.A.E education centre in Melbourne Australia for many years as well as in his private Satsuma dojo. His works are held in the National Gallery of Victoria in Melbourne, La Trobe uni. Melbourne Uni. Japan Seminar House as well as private collections. He made a number of Videos and an animated film on Sumie, The Magic Brush, plus a DVD in 2005 Portraits of Silence. His books included, Sumie The way of the brush and The Wandering Brush (Haiku and Sumie)Kyudo, Zen in Action

Posted by Gerard Menzel at 03:29 No comments:

Andre was in his old age here yet his message was always the same.
Enter silence and embrace the void.
Enjoy

Posted by Gerard Menzel at 03:05 No comments: